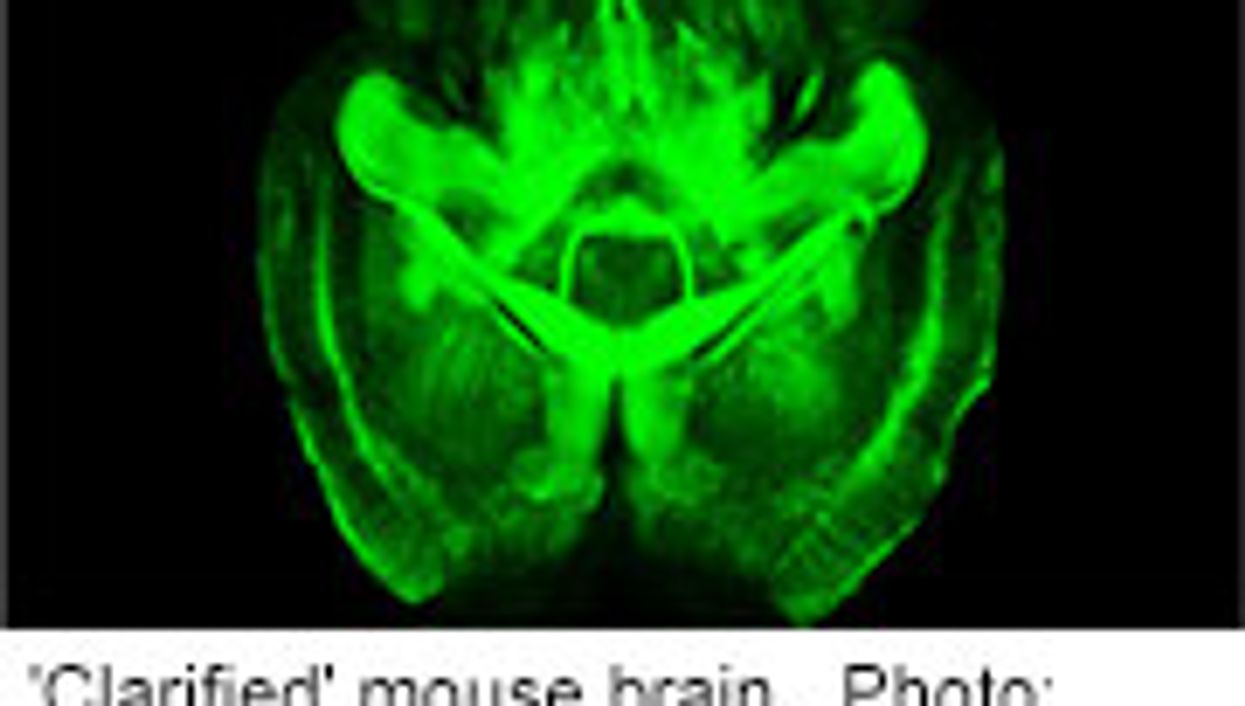 WEDNESDAY, April 10, 2013 (HealthDay News) -- Scientists who developed a way to make a mouse brain transparent say the process could revolutionize the way the human brain is studied.

A transparent brain can be examined whole, without the need to slice or section it. The three-dimensional complexity of molecular structures and wiring are intact and can be assessed and probed with visible light and chemicals, according to the Stanford University researchers.

The chemical process for making the brain transparent -- called CLARITY -- is done after it is removed from the animal. The process involves replacing the brain's lipids (fatty molecules) with a hydrogel, according to a study published online April 10 in the journal Nature.

The research described in the study was performed primarily on a mouse brain, but the investigators have used the same process on zebrafish and on preserved human brain samples, and achieved similar results.

"Studying intact systems with this sort of molecular resolution and global scope -- to be able to see the fine detail and the big picture at the same time -- has been a major unmet goal in biology, and a goal that CLARITY begins to address," team leader Karl Deisseroth, a bioengineer and psychiatrist, said in a Stanford news release.

Dr. Thomas Insel, director of the U.S. National Institute of Mental Health (NIMH), said in the news release: "This feat of chemical engineering promises to transform the way we study the brain's anatomy and how disease changes it. No longer will the in-depth study of our most important three-dimensional organ be constrained by two-dimensional methods."

The NIMH provided funding for the research.

"CLARITY promises to revolutionize our understanding of how local and global changes in brain structure and activity translate into behavior," Paul Frankland, a senior scientist in neurosciences and mental health at the Hospital for Sick Children Research Institute in Toronto, said in the news release. He was not involved in the research.

Experts note that success in animal research often does not translate to success in human research.

The U.S. National Institute of Neurological Disorders and Stroke has more about the brain.

AHA News: Calming Us Down or Revving Us Up, Music Can Be Good for the Heart