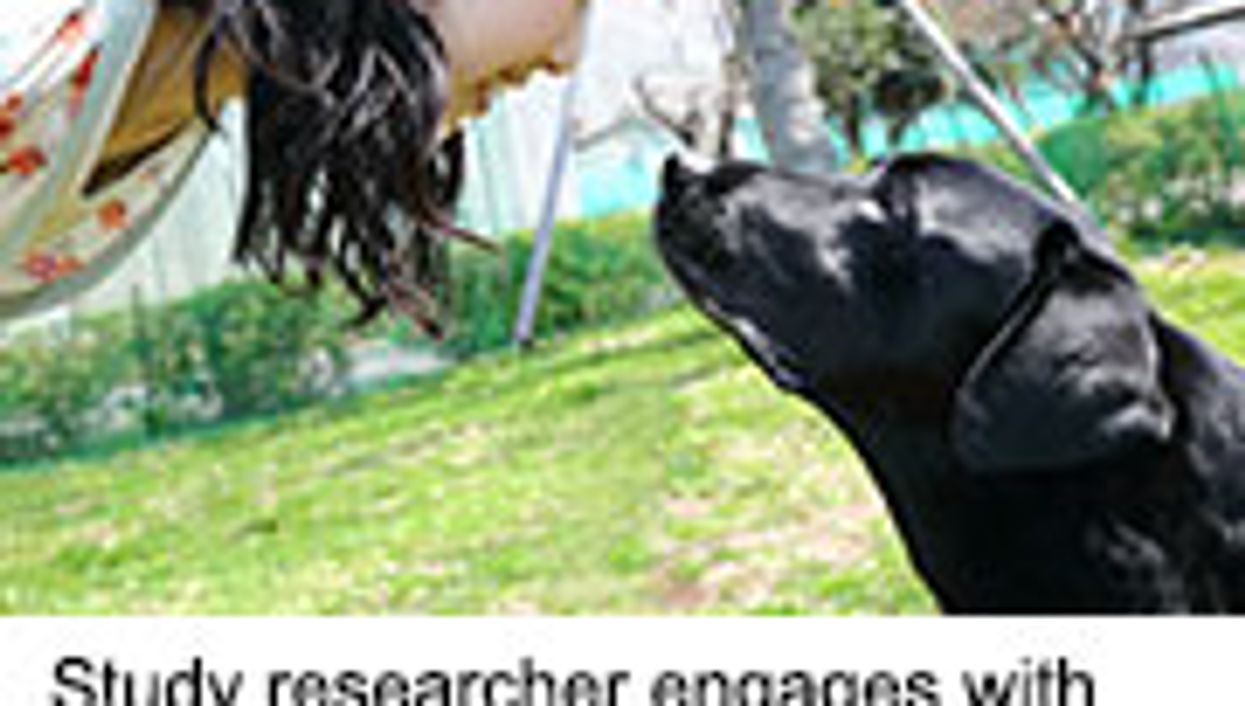 THURSDAY, April 16, 2015 (HealthDay News) -- When humans and their four-legged, furry best friends look into one another's eyes, there is biological evidence that their bond strengthens, researchers report.

Oxytocin -- the same hormone responsible for helping mothers bond to their infants -- increases in both dogs and their owners when they maintain eye contact, the Japanese scientists found.

"Certainly, people who suggest their dog is part of the family are probably quite right," said Dr. Greg Nelson, director of surgery and diagnostic imaging at Central Veterinary Associates in Valley Stream, N.Y. "A dog is not merely a housed animal that accepts food from us and tries to cohabitate. Rather, they have a relationship more as a parent and child or peer to peer."

In a series of experiments, the researchers showed that a positive "biofeedback loop" appears to exist between dogs and humans, whereby a rise in oxytocin in one triggers a rise in the hormone for the other.

The findings were published in the April 17 issue of the journal Science.

"Humans have evolved to use human-specific communicative tools, mainly the eye gaze," said study co-author Dr. Takefumi Kikusui, a veterinarian and researcher in the department of animal science and biotechnology at Azabu University in Kanagawa, Japan.

"Eye gaze may be functioning instead of physical touch or hugging. The point is that dogs can show the same communicative gazing toward humans," Kikusui said.

In the first experiment, dogs and their owners interacted for 30 minutes. Those who spent the most timing gazing into one another's eyes had higher concentrations of oxytocin in their urine afterward.

Dog-owner pairs without the lengthy eye gazing did not have the same increase in oxytocin. Owners also touched their dogs and spoke to their dogs more when they had more eye contact with them.

In the second experiment, researchers sprayed oxytocin into the nostrils of 27 dogs and released each into a room with their owner and two strangers. The female dogs spent more time looking at their owners, who also experienced an increase in oxytocin.

When the first experiment was conducted with hand-raised wolves who had bonded with their owners, however, no changes in oxytocin levels were seen from gazing. Wolves typically use eye contact as a threat and avoid human eye contact, the study noted.

The findings suggest that mutual gazing between dog and owner as a form of social communication likely co-evolved as dogs became domesticated and improved bonding between the two species, the authors said.

"Dogs have evolved together with humans as companions for the past 12,000 years," said Dr. Adam Malcolm, a veterinarian at Big Hollow Companion Animal Hospital in Peoria, Ill. "It does not surprise me in the slightest that a shared physiological oxytocin feedback loop has been demonstrated in both species."

In fact, these findings fit with past research finding that dogs exhibit a similar subconscious behavior that humans do in looking at other people, he said.

"Dogs are the only other domestic species that exhibit the left glance phenomenon, a subconscious movement of the eyes toward the right aspect of a person's face as two people are facing one another and communicating," Malcolm explained. "It has been established that the right side of the human face is more expressive in nonverbal communication than the left side."

Although wolves did not stimulate oxytocin production in their owners, there are other species that can stimulate this hormone's release in humans, Kikusui said. "If cats gaze at their owners, it is possible," he said.

Oxytocin is produced in the hypothalamus and plays a role in a wide range of behaviors, said Dr. Alan Manevitz, a clinical psychiatrist at Lenox Hill Hospital in New York City. These behaviors include social recognition, orgasm, bonding, anxiety, maternal behaviors, maternal bonding, lactation and possibly healing wounds by affecting an injury's inflammation, he said.

"The release of oxytocin in a positive social relationship with either a human or an animal promotes the potential for better heath and more positive bonding," Manevitz said. "This may be a part of the biological mechanisms that support the use of therapy dogs seen to help individuals clinically to feel less anxious and more at peace."

Learn more about dog behavior from the ASPCA.

AAN: Stroke Occurs in 2.2 Percent of Patients Admitted to ICU With COVID-19

Prevalence of Migraine, Severe Headache Up for Adults With IBD