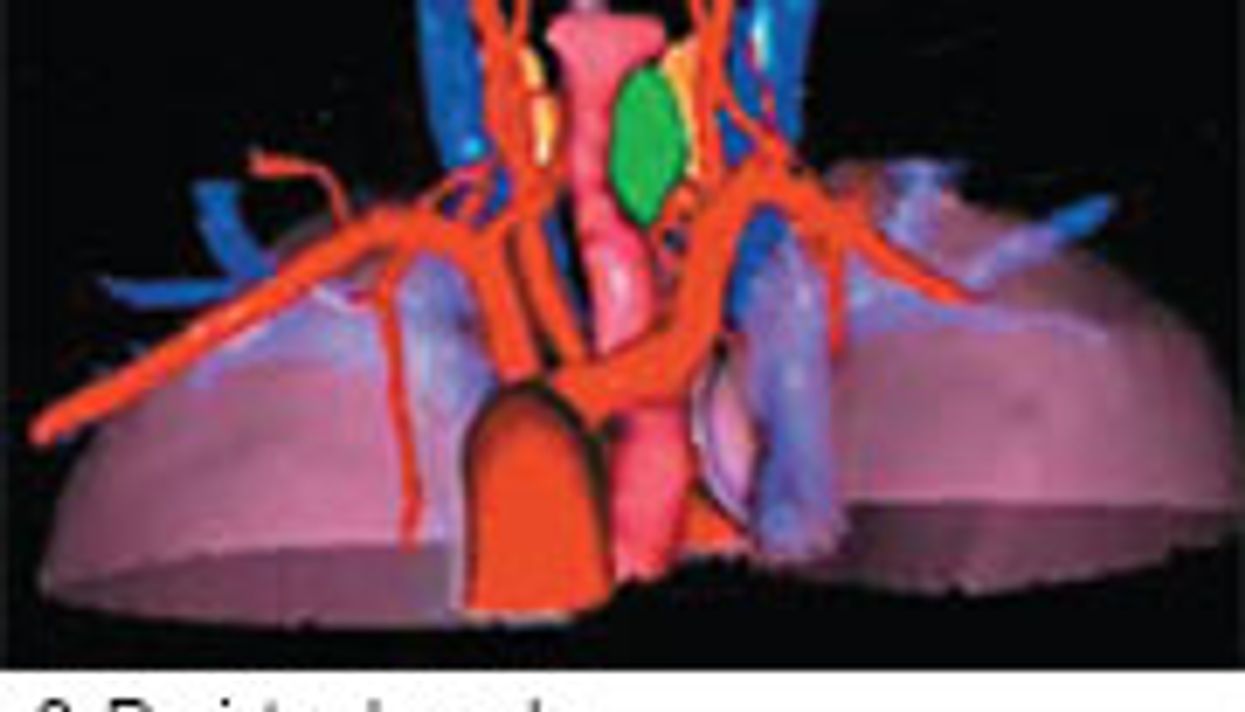 WEDNESDAY, Sept. 12, 2012 (HealthDay News) -- Researchers in France have developed a computer program they say could make surgery safer by providing doctors with a three-dimensional road map of a patient's interior.

The program, which turns medical images from CT scans into 3-D pictures, was tested on a 66-year-old woman before surgery to remove a tumor from her parathyroid gland.

"We believe the image guidance may represent the next revolution in surgery," said study co-author Dr. Michele Diana, a surgical research fellow at the Research Institute against Digestive Cancer in Strasbourg.

The group created a virtual image of the patient's neck based on prior CT scans. While the CT scans allowed her doctors to find the tumor in her neck, this 3-D virtual model gave them an idea where her nerves and blood vessels were, Diana explained.

The virtual picture alerted doctors that one of the nerves in her neck, called the laryngeal nerve, followed an unusual pathway.

"In the absence of 3-D modeling, we would have missed the variation," said Diana. Instead, her surgeons were able to make an incision that avoided damage to her laryngeal nerve.

Laryngeal nerves have a divergent path, called nonrecurrent, in less than 1 percent of patients. Injury to this nerve can lead to voice hoarseness and voice loss.

"We contribute more than 100 cases of parathyroidectomies per year so if anatomical variation is in 1 percent of patients, that is one case per year. We cannot tolerate this kind of complication," Diana said.

The case report was described in a letter published Sept. 13 in the New England Journal of Medicine.

The software that Diana and his colleagues developed helps surgeons plan their procedure, Diana said. In addition, doctors can overlay the virtual image on top of the actual images captured during surgery to give them an idea of the tissues, nerves and blood vessels in the area where they are operating.

One expert said the software's clinical value remains to be seen.

Although this tool would probably provide doctors with information before surgery, "it's a question of how often is it going to be useful and how many people do you have to study to get useful information for one person," said Dr. Bruce Davidson, a professor of otolaryngology-head and neck surgery at Georgetown University Hospital in Washington, D.C.

"I've done a thousand thyroidectomies, I've seen three [nonrecurrent laryngeal nerves], and I've recognized each one at the time and there wasn't an injury to it," Davidson said.

"A lot of the 3-D imaging just naturally happens in the head of the surgeon or radiologist," Davidson added.

While imaging before thyroid and parathyroid surgery is very common to localize the tumor, "we typically do an ultrasound and in cases where we still have questions, we do MRI," Davidson said.

Unlike MRI and ultrasound, CT scanning exposes patients to low levels of radiation. CT scanning can also cause a rare complication called thyroid storm in people with a hyperactive thyroid gland that leads to high blood pressure and agitation.

Diana and his colleagues are working to update their computer software so that it can create virtual pictures from MRI imaging, which does not carry those risks. The program can already use images from ultrasound, but Diana said that these are sometimes less accurate than MRI.

The current case report is part of a study that Diana's colleagues are conducting at the Research Institute against Digestive Cancer in Strasbourg to evaluate the utility of virtual neck exploration in connection with parathyroid surgery.

The research team has also used their software to create a virtual image of a patient's adrenal glands, located above the kidneys, which they say helped guide surgeons removing a cancerous adrenal gland.

Diana and his colleagues are also using their software for surgeries to remove tumors in the liver and pancreas.

In these cases, Diana said, virtual exploration not only helps the surgeon avoid nerves and blood vessels, but could also make it easier to remove only the cancerous tissue while leaving as much healthy tissue as possible.

For more information about thyroid and parathyroid health, visit the American Thyroid Association.