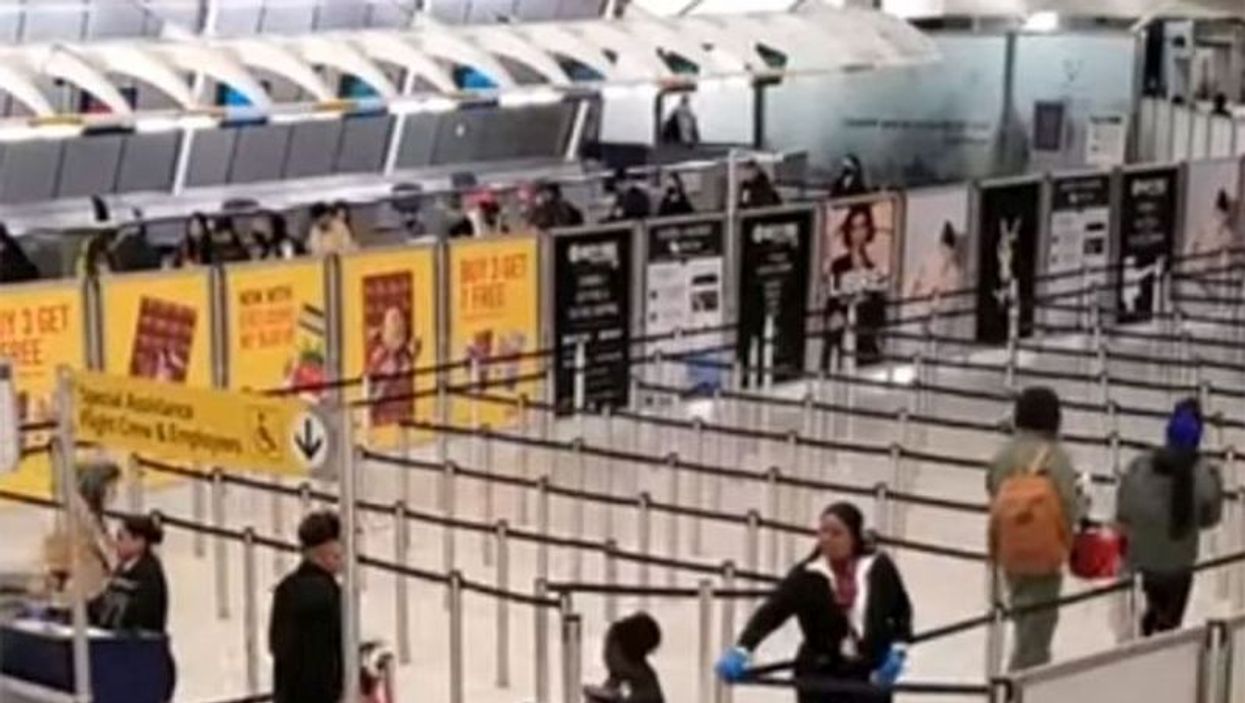 After a quick beep and a green light, Damon is allowed into a store to buy a prom dress for his daughter.

That wristband was an "immunity passport" -- a certification of his character's immunity to the movie's deadly virus.

With fiction quickly becoming reality, immunity passports are now being touted as a means to reopen the world following COVID-19 lockdowns. But experts worry that a host of practical and ethical problems make the concept unworkable and potentially dangerous to privacy and liberty.

Governments and private businesses are currently developing similar programs that would allow people who have proven immunity against COVID-19 to move freely about, without hewing to social distancing guidelines or public health measures.

For example, Chile is issuing three-month "medical release certificates" to people who have recovered from COVID-19, and Britain has announced plans to issue "antibody certificates" to those who test positive for coronavirus antibodies.

But there are fundamental problems with these immunity passports, in terms of how they would work and how they would be used, Kofler and other experts say.

At this point, medical science can't even say whether a person who has recovered from COVID-19 is indeed immune from the disease, or if the presence of coronavirus antibodies in your bloodstream conveys any level of immunity, said Gigi Kwik Gronvall, a senior scholar at the Johns Hopkins Center for Health Security in Baltimore.

For example, people might need a certain level of coronavirus antibodies in their blood to be immune, Gronvall said. Immunity might not even depend on antibodies at all; instead, other factors like the immune system's innate memory might be the only thing that would prevent reinfection.

Worse, the accuracy rate of current antibody tests is so iffy that a person without immunity might actually get a false positive, getting a passport they shouldn't have and increasing their risk of catching and spreading the virus, Kofler said.

Guidelines issued last week by the U.S. Centers for Disease Control and Prevention state that given their lack of accuracy, antibody test results "should not be used to make decisions about grouping persons residing in or being admitted to congregate settings, such as schools, dormitories, or correctional facilities," or to "make decisions about returning persons to the workplace."

"While I do think that there is a degree of immunity that individuals who have recovered from COVID possess, it will be very hard to operationalize an immunity passport," agreed Dr. Amesh Adalja, a senior scholar at the Johns Hopkins Center for Health Security.

"There are many questions about immunity, including its duration, its durability, and how to measure it that makes it difficult to rely completely on. That said, I do believe those with antibodies -- as assessed by a highly specific test -- do have some protection for a period of time from reinfection," Adalja said.

Even if antibody tests say something meaningful, there's not nearly enough access to testing to conduct an immunity passport program in a fair manner, said Françoise Baylis, a professor of ethics at Dalhousie University in Nova Scotia, Canada.

Nations would need at least double as many test kits available as there are citizens in their country, to conduct an equitable program, she said.

"In theory, you test everybody once, but not everybody is going to test as having been exposed to the virus and having recovered from COVID-19," Baylis said. "So you've got to at least offer people a second chance, right? That gets you to two tests. People might fail this on the second attempt as well, so you're going to have to be constantly able to test your population."

There are 38 million people in Canada, but that country has said it would only be able to conduct 1 million antibody tests within the next two years, Baylis noted.

"What happens to the other 37 million Canadians?" she asked.

The United States would need even more tests -- 660 million tests at minimum, to offer at least two opportunities for each of the country's 330 million residents.

Only a small percentage infected

Additionally, too few people have been infected with COVID-19 at this point to make immunity passports a linchpin for reopening the economy in the United States or elsewhere.

Only 2% to 3% of the global population has recovered from the coronavirus, Kofler noted.

Baylis noted that even in COVID-19 hotspots, only 15% to 30% of people have recovered from infection.

"You don't reopen the economy with 30% of your population," Baylis said.

Beyond those practical concerns, there also are ethical roadblocks to instituting an immunity passport program, experts said.

A physical passport worn by a recipient would "make it very easy to tell across the street if somebody has a wristband that signifies them as immune or not immune," said Dakota Gruener, executive director of the ID2020 Alliance, a global public/private alliance focused on the development of digital ID programs.

Gruener said many also are uncomfortable with the notion of centralized databases maintained by government organizations that would be "pinged" every time someone is asked to prove their COVID-19 immunity.

Gruener favors a decentralized system, where a person would carry their immunity passport around with them on their smartphone.

"Your data remains your own, stored locally on your own device," Gruener said.

Experts also are concerned that authorities would use immunity passports as one more means of harassing blacks and other minorities, promoting "stop-and-frisk" policies.

"We see this as one more reason to stop somebody who's freely walking about to be able to demand, 'Do you have the right certification to be out in public?'" Baylis said.

These sort of concerns are being bulldozed by companies eager to get folks back to work, Gruener said, and officials and ethicists need to work with private firms to make sure these problems are addressed.

But Baylis countered that any efforts by private companies to develop immunity passports should be halted, rather than accommodated.

"It's wrong to allow the private sector to answer that question for us and then to think that society, by its governance, just has to respond by putting parameters that would somehow satisfy certain kinds of ethical or social concerns," Baylis said.

"The first question is whether we should be doing this," Baylis said. "Only when you answer that question in the affirmative do you then move on to the second series of questions about how we do this ethically."