See What HealthDay Can Do For You
Contact Us
December 1, 2014

The Man in the Iron Lung 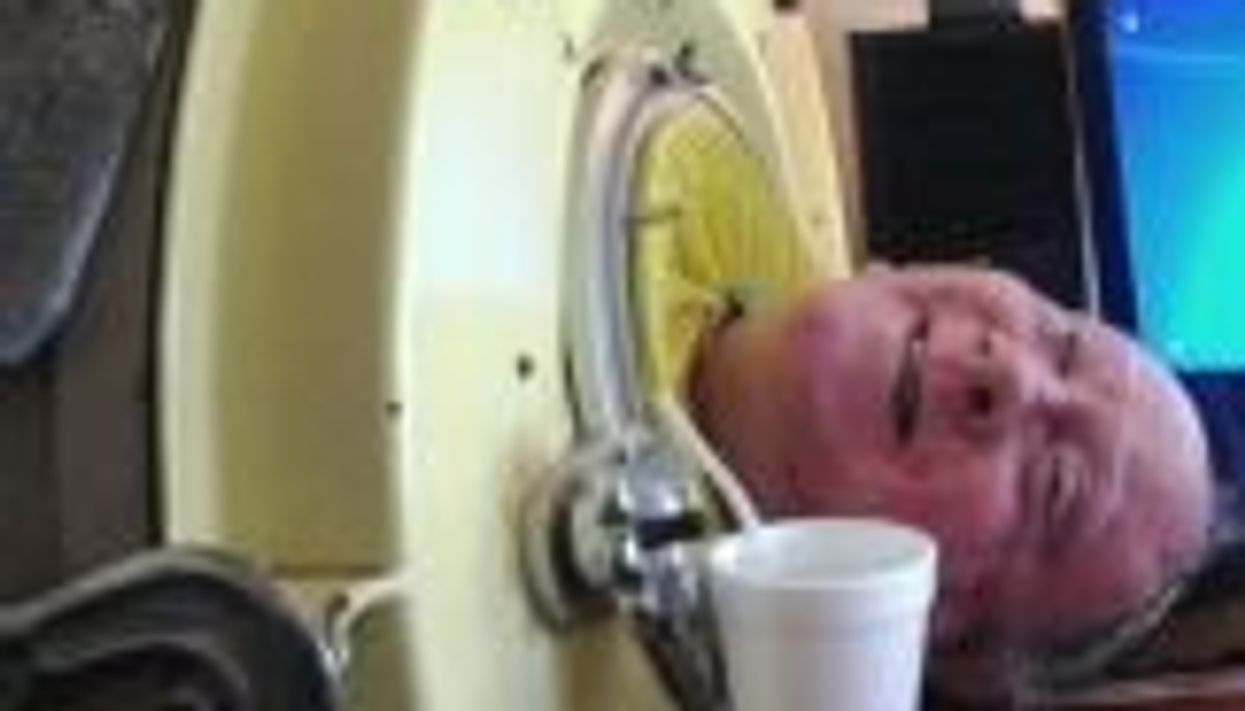 MONDAY, Dec. 1, 2014 (HealthDay News) -- Paul Alexander's most impressive accomplishment is something most people never think about.

He taught himself how to breathe.

Alexander, 67, is a victim of the worst that polio had to offer children in the late 1940s and early 1950s. At the age of 6, he was completely paralyzed by the disease, his lungs stopped working, and he was literally thrown into an iron lung.

Alexander has been in that iron lung for 61 years because he remains almost totally paralyzed, able to move only his head, neck and mouth. He is one of an estimated seven people in the United States who are still living in an iron lung, and yet he has had a long and successful career as a lawyer.

"Over the years, I've been able to escape this machine for a few hours at a time by teaching myself voluntary breathing," Alexander said recently as he lay in the iron lung at his home in Dallas, Texas. "I have to consciously push air into my lungs, something that's done involuntarily by just about everyone else. It's hard work, but it allows me to escape this infernal device, if only for a little while."

Alexander "escapes" the machine most often when he is litigating a case -- his specialty is family law -- or gives a speech.

While he sometimes condemns the contraption that keeps him alive, Alexander is most grateful for his iron lung, whose machinery is essentially unchanged from the first ones that were put in use in the late 1930s. His machine, in fact, is the same one he entered 61 years ago.

"It is my cage, but it's also my cocoon," he said, as the iron lung issued a noticeable whishing sound, an almost uncanny replication of normal breathing.

But we're getting ahead of the story.

This year marks the 60th anniversary of the nation's first mass polio vaccine inoculations, a time when hundreds of thousands of grade school students -- many of them throughout the South -- lined up in school gymnasiums, stuck out their arm and gritted their teeth as a nurse gave them Dr. Jonas Salk's experimental vaccine.

The shot was literally a game-changer. Most of these children had seen at least one or two classmates come to school on crutches, paralyzed by the ravages of polio. More than a few knew other students and friends who had died from the disease.

So 1954 signified their liberation during the summer -- they could return to public swimming pools and play in the rain and eat in restaurants and not be afraid that they would wake up the next day with a fever and terrible leg pains, which could rapidly lead to paralysis.

That's what happened to 6-year-old Paul Alexander in 1952, two years too early for the Salk vaccine.

"I remember it was really hot and raining, something that is sort of rare for Dallas in August," he recalled, "and my brother and I had been outside playing, running around and getting wet when the rain started.

"Our mother called for us to come in for dinner, and I remember her taking one look at me -- hot and wet and feverish -- and she cried out, 'Oh my God!' She ripped my clothes off and threw me onto her and my dad's bed and called the doctor.

"She knew right away that I had polio. I don't know how she knew, but she knew. I remember feeling hot and feverish, and for the next few days, I stayed in the bed and didn't move. I remember I had this coloring book, and I felt this compulsion to color as much as I could, sort of like maybe I wouldn't be able to do it in the future."

Why didn't Alexander's parents take him to the hospital? "Our family doctor said that all the kids with polio were at Parkland (Dallas' big municipal hospital), and he didn't want me there with the other kids because maybe I had a better chance to recover at home," Alexander said.

But all of that became moot about six days later when he could no longer move and found it difficult to breathe: "I remember having terrible pains in my legs, and breathing became really laborious. So they finally took me to Parkland."

And that's when the most horrifying event occurred before Alexander's long battle with polio could even begin: "I had become immobile; I don't think I could even talk, so the hospital staff put me on a gurney in a long hallway with all the other hopeless polio kids. Most of them were dead."

That would have been Alexander's fate, too, if not for Dr. Milton Davis, a well-known pediatric cardiologist who was examining all of the children in the hallway. "He took one look at me, gathered me up in his arms, and I think he performed a tracheotomy on me almost immediately so I could breathe," Alexander said. "And the next thing I remember, I was inside an iron lung."

And then he blacked out.

Alexander woke up weeks later still in the iron lung: "The pain was still there, although it seemed much less to me, and the iron lung pumped hot steam through a thick plastic water pump into my chest. This kept the mucuous loose enough so I could breathe."

He couldn't see through the steam at first, and he couldn't talk. But Alexander said he found some sort of determination within himself as strong as the iron in the device that was keeping him alive. "I decided I was going to fight this," he said. "I was going to have a life."

Eighteen months later, his parents brought him home. They stayed with him in shifts, fed him, helped him with school work (he was still enrolled in elementary school) and encouraged him to keep up his curiosity and enthusiasm for learning.

"My mother lobbied the school district for home-school learning, something very rare in the 1950s," he said. His dad fashioned a writing implement for him, similar to a T-square, which Alexander would put in his mouth and move around with his neck muscles in order to write.

Through their efforts and his own fierce determination, Alexander graduated high school as the class salutatorian. "I would have been valedictorian but the biology teacher gave me a B because I couldn't take lab," he joked.

Scholarships to Southern Methodist University in Dallas and the University of Texas in Austin allowed Alexander, with the help of a paid health aide, to get an undergraduate degree and then a law degree. He returned to the Dallas area and became associated with an Arlington law firm for a while, but eventually established a private practice that still handles everything from family law to financial cases.

"With help from a medical aide or one of my friends, I can get out of the lung and attend functions in a wheelchair or argue a case for a few hours," he said. "But I always have to remember to tell myself to inhale, exhale, inhale."

Alexander came to the attention this year of the leaders of the Dallas area's Rotary clubs through one of his doctors, Alexander Peralta, Jr., who is a Rotarian from Duncanville, Texas.

Rotary International has been working with the Bill and Melinda Gates Foundation to eliminate polio worldwide, just as smallpox has been eradicated.

"One of our clubs, which is well-versed in modern technology (the Dallas e-Club) went to Paul's house and made a four-minute video with him," said Bill Dendy, District Governor of District 5810, which has 65 local Rotary clubs in the north Texas area.

"What none of us realized at first is what a compelling story this is, not only Paul's triumphs under difficult circumstances, but also what a terrifying experience it can be, just sitting in the presence of that machine that keeps him alive. The iron lung personalizes the horror all those thousands of kids went through a little more than half a century ago," Dendy said. The video they made has been submitted to the local PBS station in Dallas.

Since making contact with Alexander, various district Rotary clubs have volunteered to make improvements to his house -- an old ramp leading to the front door was replaced -- and to be available to take him to his appointments. Throughout his life, Alexander has had a combination of help from health aides provided through the government and friends who pitch in.

Alexander said his iron lung is no longer supported by any company on an ongoing basis. The last company to service his machine, Philips Respironics, no longer does so. "So now, we have to strip spare parts from other discarded iron lungs to keep us going," he said. So far, it hasn't been a problem, he added: "There are only seven iron lung users left, so I don't think this is going to be a big problem of supply and demand."

How did he accomplish so much -- and keep his sense of humor -- while being virtually immobile for more than 60 years?

"It all starts with love," Alexander said. "My parents raised me in love. They taught me never to give up. They taught me the importance of relationships. They were always there for me.

"So, naturally, I had to reciprocate. And you know what? They were right. Anything is possible."

To learn about the history of the iron lung, visit The Smithsonian National Museum of American History.