Which of the 4 New 'Personality Types' Are You? 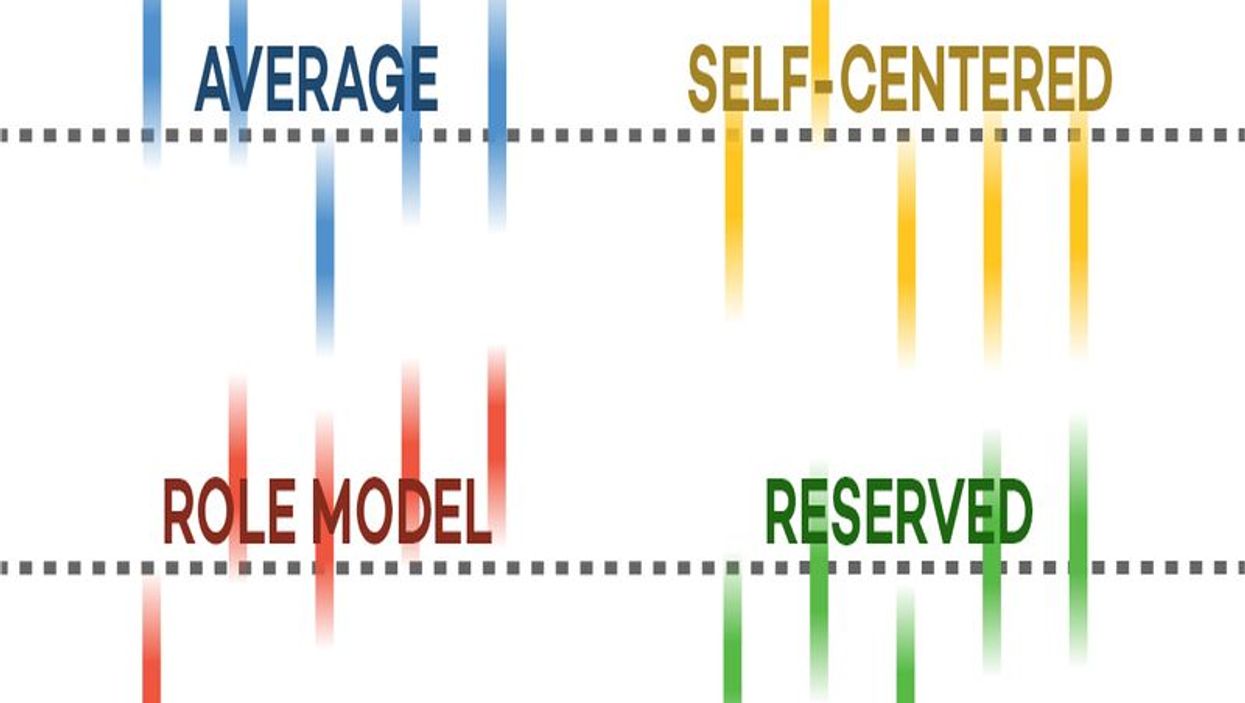 But that assumption is being challenged by a major new study, which discovered at least four distinct personality types into which people tend to cluster.

Researchers discovered these clusters by running the results of 1.5 million personality inventory questionnaires through a computer, said lead researcher Martin Gerlach. He is a doctoral student at Northwestern University, in Evanston, Ill.

Gerlach and his team fed these into the computer to see if people would tend to cluster around similar levels of shared personality traits.

The investigators found at least four clusters, which they compared to "lumps in the batter," Gerlach said.

The first is the "Average" personality type, which is characterized by average scores in all traits, the researchers said.

The other three clusters are roughly organized along the traits of neuroticism (level of emotional stability) and extraversion (the quality of being outgoing):

These clusters were found thanks to four large data sets comprising more than a million people, obtained from different studies performed around the world, Gerlach noted.

"It was previously unthinkable to obtain this amount of data," Gerlach said.

Not everyone will fall into one of these personality types, he added, and some people may even fall somewhere in the middle between two of them.

Your specific personality type is not set in stone, either, he explained.

For example, researchers speculate that the younger you are, the more likely you will be to fall within the Self-Centered category, particularly if you're a teenage boy, Gerlach said.

But with age and seasoning, a good number of these people could evolve into Role Models.

"We would expect people to move from one personality type to another personality type," Gerlach said. "The chances are that older people are more likely to be close to the Role Model personality type. You could describe these people as 'nice' people."

The discovery of these clusters runs counter to much of current psychological theory, which has concluded that personality categories don't exist, the study authors said.

Senior researcher Luis Nunes Amaral is a professor of chemical and biological engineering at Northwestern Engineering. "Personality types only existed in self-help literature, and did not have a place in scientific journals. Now, we think this will change because of this study," he said in a university news release.

These clusters could help people predict how well you'll succeed in a given job, or your vulnerability to certain mental or emotional disorders, Gerlach said.

Psychologists have greeted that notion -- and these new findings -- with some skepticism, however.

James Maddux, a professor emeritus of psychology with George Mason University, said, "I have no qualms about the methodology and statistics, but I have serious doubts about the clinical utility of yet another instrument that categorizes people into types." Maddux was not involved with the study.

"For 40 years or more, clinical psychology has been moving away from using the assessment of personality traits and types to inform treatment and increasingly toward using assessments of people's problematic thoughts, feelings and behaviors as they occur in specific problematic situations, which is the essence of cognitive-behavioral therapy," Maddux said.

"I doubt that many clinical psychology doctoral programs in the U.S. or Canada would add this instrument to their course or courses on psychological assessment," he added.

But New York City psychiatrist Dr. Timothy Sullivan said, "Given the numbers of subjects they assessed, it suggests we need take this seriously. There is something meaningful here."

However, it's not clear how useful these categories will be in dealing with people's mental health issues, said Sullivan, chair of psychiatry and behavioral sciences at Staten Island University Hospital.

"I think the question for us in psychiatry is, is it meaningful to us clinically?" Sullivan said. "Does it help us to think about how we might help people who have problems coping in life? In that regard, we would need to play around with these categories and see whether or not they represent something meaningful in a clinical setting."

The study was published Sept. 17 in the journal Nature Human Behavior.

The American Psychological Association has more about personality.