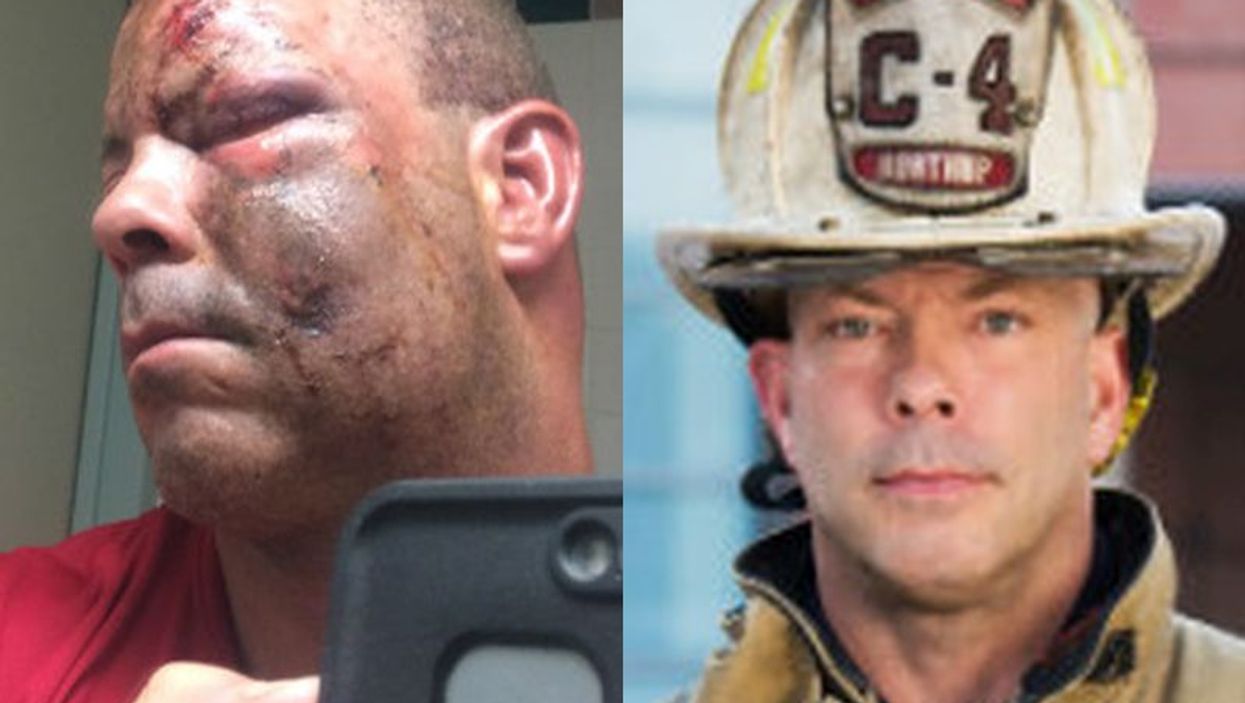 TUESDAY, July 3, 2018 (HealthDay News) -- Fire Capt. Jay Northup lit the fuse for the intended climax of his backyard fireworks display, a pricey 12-mortar box that would create a wondrous shower of glittering lights over his neighborhood.

Three of the 12 tubes went off, and then silence. A dud.

"I spent $600 on that, it's going to work," recalled Northup, who serves with the Euclid Fire Department in Ohio. "I figured I'll wait about 10 minutes to make sure it's not going to fire, then maybe I'll peel the paper to see if I can find the wick or something, see if it's something I can salvage."

That decision almost left Northup without his vision on July 4, 2016.

A mortar wound up exploding, causing terrible injuries to his face, eyes and head. The blast caused bleeding in his brain, and his forehead required 35 stitches to close the gash.

These days, Northup, 47, offers himself up as a cautionary tale on the dangers of fireworks, fully expecting to be ribbed around the firehouse.

"I'm supposed to be somebody who knows better, and I know that. Me being human -- just like everybody else -- I thought I knew better, and in the end it almost cost me my life," Northup said. "Let the professionals handle the fireworks. Be smart. You can't call a redo."

Fireworks were involved in an estimated 12,900 injuries treated in U.S. emergency rooms in 2017, and about 8,700 of those occurred during the weeks before and after the Fourth of July, according to the U.S. Consumer Product Safety Commission.

Northup is well-versed in the dangers of fireworks, having served as a firefighter and paramedic for 25 years.

"I've been picking up kids with their hands blown off and eye injuries and burns from those types of things for years and years," Northup said.

But he'd started hosting a regular Fourth of July party, and at some point incorporated fireworks into the celebration.

That year, when the big mortar box failed partway through, Northup waited in the dark to make sure the fireworks didn't go off accidentally.

After what seemed a reasonable amount of time, Northup approached the device and started poking around at it. In the dark he couldn't tell his face was right over the top of one of the tubes, about a foot away.

"When I pull the paper it's just enough oxygen to allow the fuse, which was still hot, to reignite. Almost instantaneously the tube goes off in my face," Northup recalls.

The blast knocked him off his feet and blinded him.

"I can feel stuff pouring off the right side of my face," Northup said. "My right eye was blown closed instantly, and my left eye is full of debris, so I can't see anything."

Fireworks cause three types of injuries, explained Dr. Thomas Steinemann, a clinical spokesman for the American Academy of Ophthalmology and the eye doctor who treated Northup.

The extreme heat generated by the explosives causes burns, while the explosion causes concussive injuries. There also can be chemical burns caused by ingredients in the fireworks, Steinemann said.

How doctors saved his sight

Emergency doctors treating Northup first focused on a subdural hematoma, a bleeding of the brain that is one of the deadliest types of head injuries.

Once they controlled the bleeding and pressure in his brain, they stitched up Northup's forehead and treated his facial burns. Both of his eardrums had also ruptured.

Northup's right eye took a direct hit from the mortar, burning off his eyelashes and the skin around his eye. The eye's cornea and retina had both been damaged, and blood had begun to pool in his eye.

Steinemann saved Northup's eyes, but over the next 10 months "my vision just went south," Northup said.

That's because the injury prompted a traumatic cataract, in which the lens of his eye began to cloud up. It's a common condition following this sort of disastrous damage to the eye.

Northup underwent cataract surgery to replace the clouded lens of his right eye, but the injury also left his pupil paralyzed.

"Many times, the iris gets damaged because it's a delicate little muscle, and the pupil is part of the iris," Steinemann explained.

"The pupil isn't a structure. It's a little hole in the iris that lets light in. Many people with these terrible concussive types of injuries to the eye end up with a pupil that doesn't work, that's permanently stuck," he said.

Because of this, Northup is very sensitive to light and relies on sunglasses during bright days outside.

"My lens is always stuck open in my right eye. It doesn't close down for sunlight. My eyes are always dilated, 100 percent of the time," Northup said.

Still, the doctors preserved Northup's sight and his career as a firefighter/paramedic.

"The quality of them varies. There really is no standard when it comes to fireworks. Most of them are made overseas," Northup said.

He particularly urges parents to not let their kids either play around fireworks or be around others who are setting them off.

"You will never forgive yourself if something you let them do causes harm to them, and you could have prevented it," Northup said.