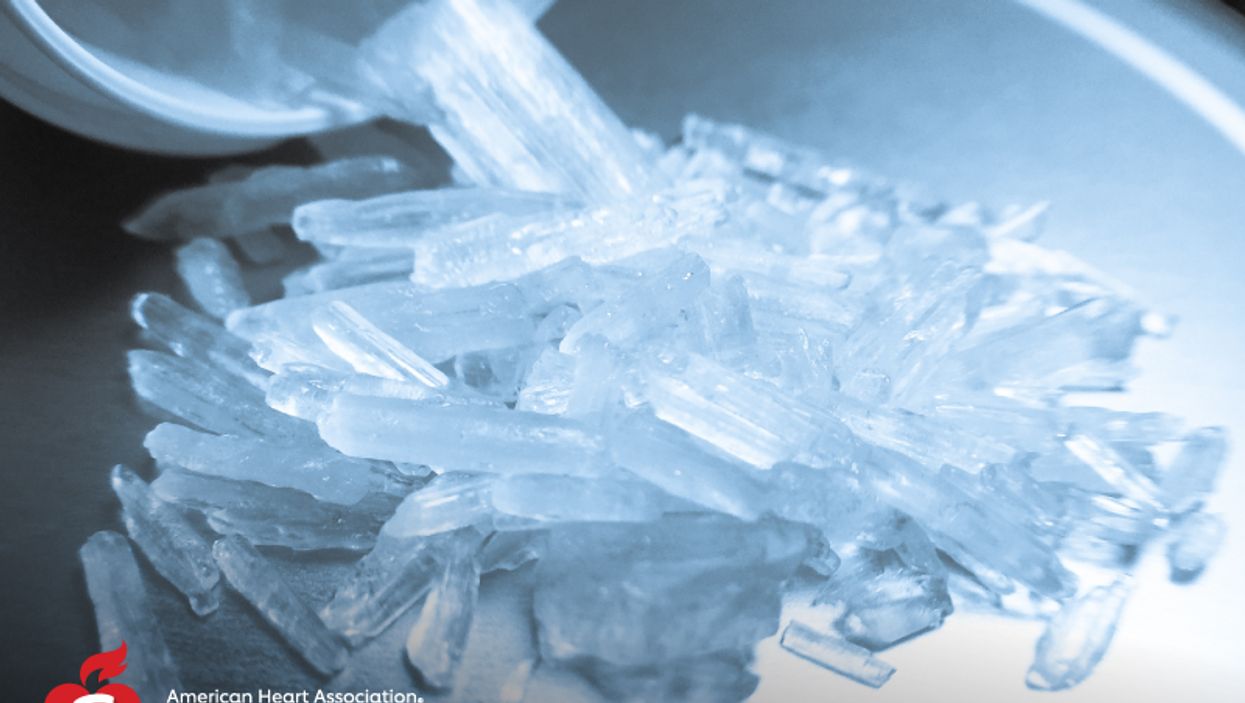 WEDNESDAY, Aug. 21, 2019 (American Heart Association News) -- Although frequently overshadowed by the opioid epidemic, surging methamphetamine use nationally and around the world has fueled a chilling crisis of its own, according to a new report.

The result is a significant increase in meth-related deaths from unique cardiovascular consequences that researchers are trying to understand.

Methamphetamines can cause blood vessels to constrict and spasm, dangerous spikes in blood pressure, and the rewiring of the heart's electrical system, among other potentially fatal heart-related problems.

"Cardiovascular disease represents the second-leading cause of death among methamphetamine abusers following only accidental overdose," according to the report published Wednesday in the American Heart Association's journal Arteriosclerosis, Thrombosis, and Vascular Biology.

The report reviews current research on methamphetamine and the drug's effect on heart disease and stroke. It discusses potential mechanisms behind those effects and highlights "our deficiencies in understanding how to treat methamphetamine-associated cardiovascular dysfunction."

Methamphetamine, also known as crank, ice, crystal meth, speed and glass, is a highly addictive stimulant that can be smoked, snorted, swallowed or injected.

Meth users tend to show evidence of cardiovascular disease at greater intensity and at younger-than-typical ages, according to the report. The review also looked at how methamphetamine leads to a type of blood pressure that affects the heart and the arteries in the lungs, and how it can lead to an abnormal heart rhythm, called arrhythmia, and change in the structure of the heart muscle, or cardiomyopathy.

The drug's popularity has been reflected in emergency room visits. Amphetamine-related admissions to hospitals soared by more than 270% between 2008 and 2015, according to a study published last fall.

One reason for the drug's growth is that methamphetamine has been easier, and cheaper, to buy. Seizures at the U.S.-Mexico border increased tenfold from 2010 to 2018. A surplus of the drug has been documented in Southeast Asia.

But the rise in methamphetamine use has been overshadowed by an opioid epidemic full of headline-grabbing tragedies.

"A lot of the time, a meth user will come off of the methamphetamines, try to get clean, and the severe dysfunction in their cardiovascular system really limits their ability to function in society to work, and that can lead to enhanced relapses," said Orr, director of the Center for Cardiovascular Diseases and Sciences at Louisiana State University Health Shreveport.

The new report is a thorough review of what cardiologists are increasingly facing, said Dr. Isac Thomas, an assistant professor at the University of California, San Diego School of Medicine.

"It's a growing body of literature but frankly, there's an overall dearth of research. This problem is just rapidly accelerating," said Thomas, who was not involved in the report but has conducted several studies on the topic. Earlier this year, he released research that found widespread meth use has created a unique form of severe heart failure, often in younger patients.

With production, trafficking and potency on the rise, methamphetamine is "expanding to more and more parts of the country and the world," Thomas said, "and that's outpacing our knowledge of how to manage and treat it, and what kind of mechanisms are involved in terms of how it's causing cardiovascular disease."

For the medical community, the report discusses potential mechanics involved in the heart damage at a molecular level. It also stresses the need for more research and public awareness.

"I'm quite sure that people who use meth don't understand or appreciate the damage they're doing to their cardiovascular system. That even if they do get clean, the damage already there could be long-lasting," said lead author Chris Kevil, vice chancellor for research and professor of pathology at LSU Health Shreveport.

He said he and his colleagues can recite stories of people who have tried to bounce back from meth use.

"They've gotten clean after using meth for many years, and then all of a sudden they have a massive heart attack due to just getting excited at their son's football game," Kevil said. "They don't realize that it's like a ticking bomb in them. On top of that, neither do their primary care physicians, most likely. This is an education concept for both the public and health care professionals."