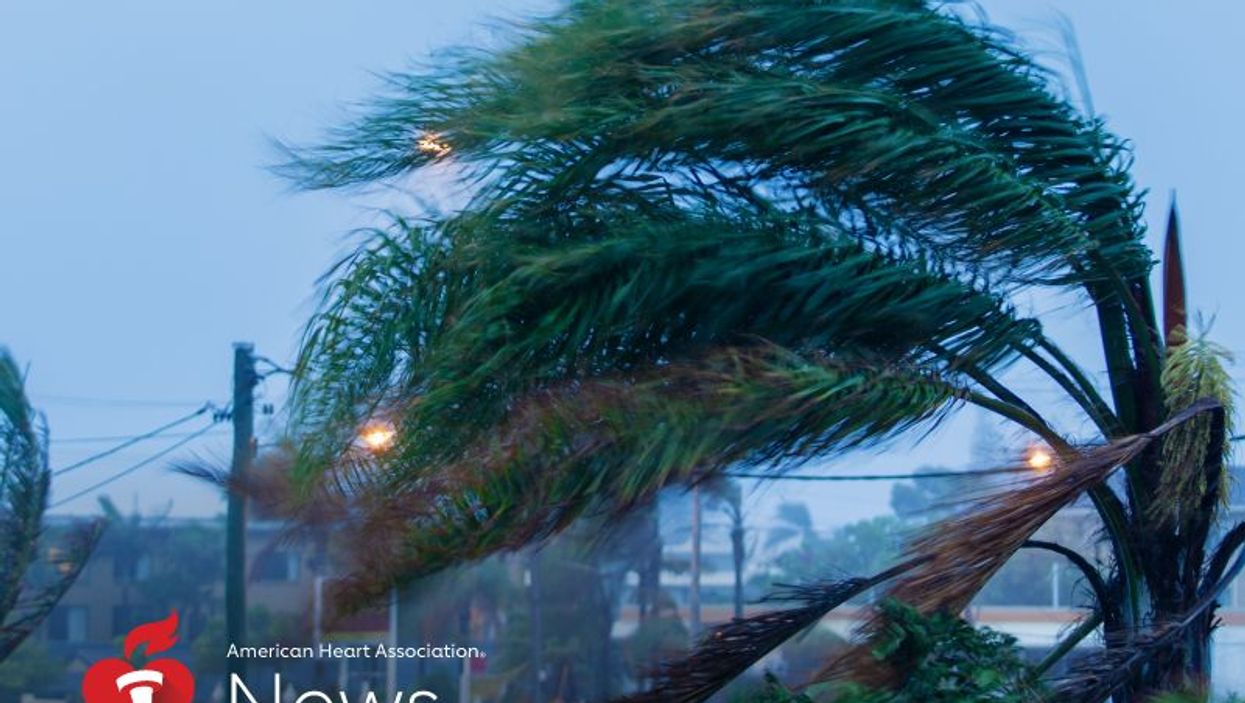 FRIDAY, Aug. 2, 2019 (American Heart Association News) -- With hurricane season in full swing, the constant counsel along the nation's coastlines is to be prepared.

But that means more than filling disaster kits with non-perishable food or planning out evacuation routes. Doctors who have helped in hurricanes say people also must plan to stay healthy before the storm – and in its aftermath.

Part of preparing for disaster means "flashlights, batteries and bottled water and stocking up on certain items, but we have to also think about our health, particularly people who have stroke or other cardiovascular risk factors," said Dr. Ralph Sacco, neurology chairman at the University of Miami Miller School of Medicine.

Experts at National Oceanic and Atmospheric Administration predicted a "near normal" storm season that could result in four to eight hurricanes this year.

But it only takes one to wreak a lifetime's worth of devastation.

Research shows a rise in cardiovascular-related events after natural disasters such as hurricanes. One study that looked at the New Jersey counties hit hardest by Hurricane Sandy found heart attacks increased by 22% in the two weeks after the 2012 storm as compared with the same period in the previous five years. Heart attack-related deaths also increased, along with the number of strokes.

Sacco said one way of preparing for a hurricane is to pack all medication necessary to control blood pressure, diabetes, cholesterol or other heart disease-related conditions.

"And have enough of them. That's the key because you never know how long your life could be disrupted," he said, suggesting a minimum of two to three weeks' worth.

"You hate to think of the worst case, but I would say at least try for a 30-day supply," he said. In the wake of an evacuation, telephone and internet service could be affected indefinitely. That also could mean an interruption of pharmacy services.

Hurricanes often disrupt attempts to maintain healthy eating and exercise routines. Sacco said it doesn't have to. When thinking about packing non-perishable foods, which often come in processed packages or cans, look for low-sodium options, he suggested.

He also emphasized the need for regular exercise even when restricted by weather.

"There are other ways that one can be physically active, including calisthenics and things at home if you can't get out to a gym," Sacco said. "Exercise is good for cardiovascular health, but it's really important for stress management."

Helping with stress and anxiety is critical to help prevent some people from resorting to old bad habits – like smoking or excessive drinking, said Dr. Anand Irimpen, chief of cardiology at Southeast Louisiana Veterans Health Care System in New Orleans.

The stress that emerges from dealing with hurricanes and other natural disasters can easily raise blood pressure and contribute to anxiety and depression, all factors that can affect heart and brain health, said Irimpen, a professor of medicine at Tulane University School of Medicine.

"I remember after Katrina, we did not have enough psychiatrists and people to provide mental health care," he said. "A lot of that stress and depression can lead to alcohol and drug abuse, which can further worsen someone's illness."

Irimpen and other researchers found that, even a decade after Katrina, hospital admissions for heart attacks in New Orleans continued to be 3 to 4 times higher than before the storm. Their study also found post-Katrina patients were more likely to have other heart attack risk factors, including coronary artery disease, diabetes and high blood pressure.

Hurricanes also can bring out symptoms in people who have yet to be diagnosed with heart disease, he said.

Sacco said that's why it's important to follow recommendations from government officials when they make announcements about evacuations. Those instructions often affect hospital operations and emergency medical services, which may shut down.

During Hurricane Irma in 2017, government officials warned ambulance drivers would not be available and that 911 calls would go unanswered.

That kind of information is critical for any family with members at risk of a cardiovascular event, Sacco said.

"People think about fatalities from roofs caving in or from floods. But you know if someone at high risk for stroke, and then during the stress of hurricane suddenly develops any of those symptoms – droopy face or arm, slurred speech – then time is going to be a problem if there is no 911 service," he said. "Maybe the lesson here is that if you are told to evacuate, healthy or at risk, heed those warnings."