See What HealthDay Can Do For You
Contact Us
September 15, 2020

Wildfires Ravage Land, and Lungs, Across the U.S. West 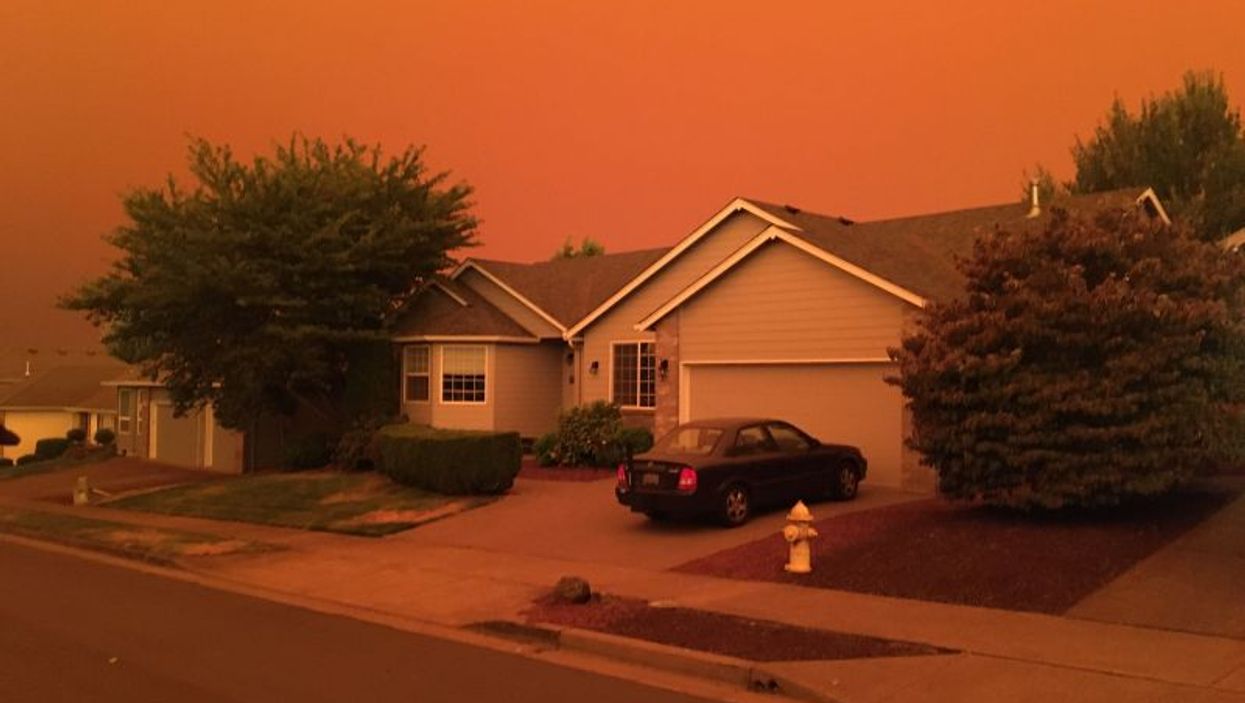 Less than a half-hour's drive away, nearly 200,000 acres were burning in one of the major Oregon wildfires that has sent a full tenth of the state's population fleeing for shelter.

But it was a workday and so Sissell kept at his job, masked in the driveway with smoke wreathing his efforts.

"We haven't stopped," Sissell, 35, said. "We've been working the whole time. I know they say the air's not good for you. I think it's going to suck for everybody."

The air quality index in Salem has been at the hazardous level since late last week, with people urged to stay indoors lest they risk their health.

In fact, the West Coast cities of Portland, Seattle, San Francisco and Vancouver, B.C., have had the worst air quality of all major metropolitan areas in the world as wildfires burn unchecked, the Washington Post reported.

Public health experts have warned people up and down the coast to remain indoors with the windows shut and their air conditioners running on recirculated air.

The smoke from these wildfires contains fine particles and a toxic mix of chemicals that can irritate the lungs and inflame the airways, said Dr. Clayton Cowl, chair of the Mayo Clinic's Division of Preventive, Occupational and Aerospace Medicine in Rochester, Minn.

Even simple wood smoke is toxic, Cowl said, but these wildfires also have been claiming homes that in recent decades have been built with lighter synthetic construction materials.

"When they ignite, they burn two to three times faster than even wood," Cowl said of the plastics and petrochemical products used to build modern homes. "Not only does it burn hotter and faster, but the actual amount of particulates that are released is greater."

Fine particles and toxic gases make their way deep into the lungs, where they damage cells and provoke an immune response, Cowl said. The lungs fill with mucous and phlegm to protect the tissues from the pollutants, and people start coughing to try and rid the lungs of the substances.

On Monday morning, the air quality index in Salem stood at around 420, according to monitoring from the Oregon Department of Environmental Quality. Air quality of 301 or higher is considered hazardous by the U.S. Environmental Protection Agency, which describes that level as a "health warning of emergency conditions; everyone is more likely to be affected."

Used and new A/C air filters from a Salem, Ore. home. Used (top) filter was clogged with ash within 12 hours

Sissell said his 8-year-old son has been suffering from a persistent cough since the wildfires started.

Up the street, Janet Herb said her family has been suffering from headaches, watery eyes and shortness of breath, "as if you've just gone running."

Her daughter "definitely coughs more at night," said Herb, 38. "They can't go outside for very long. But we're healthy and we're young. I worry more about people with asthma and other health problems."

People with COPD, asthma and other respiratory ailments are certainly at the most danger from the smoke-filled air, said Cowl, immediate past president of the American College of Chest Physicians.

But the toxic air also is bad for people with other chronic conditions, and even average people, said Dr. Gopal Allada, an associate professor of pulmonary and critical care medicine at the Oregon Health and Science University School of Medicine in Portland.

"People with chronic heart disease also feel it because of the impact it makes on the lungs and the additional stress people have with breathing and coughing, that can stress out other parts of the body," Allada said.

"We do know that if you chronically smoke cigarettes you are absolutely likely to have a worse outcome with COVID," Allada said. "There's very good reason to believe that being out and exposing yourself and your lungs to this could potentially make COVID a worse case."

Even without COVID-19, indoor air pollution has been shown to trigger respiratory infections like pneumonia and bronchiolitis, according to the World Health Organization.

The long-term effects of such smoke exposure aren't known, because these sort of wildfires don't happen often enough to be able to track those exposed to the smoke for years and decades, Cowl said.

But a recent study of Montana residents showed that after bad fire seasons in that state, the following flu seasons tended to be three to five times worse, the Times reported.

People have been urged to keep their windows closed and to change out their furnace or A/C filters. Filters with an MERV rating of 11 or higher can filter out small particulate matter and keep the air inside homes clean, Allada said.

"Using a good filter and of course replacing them regularly would help prevent that particulate matter from getting into one's home," Allada said.

People also can help themselves by reducing other sources of indoor air pollution. Don't smoke or run a wood-burning stove or light a candle, and avoid stirring up dust by vacuuming unless your vacuum has a high-quality HEPA filter, the Oregon Health Authority recommends.

You also should drink plenty of water and stay hydrated. It not only relieves your scratchy throat and cough, but also can improve your lungs' ability to filter out air pollutants, Cowl explained.

Folks who have to venture from home should wear a mask for COVID-19 protection anyway, and that mask could filter out some particulate matter, Allada said. However, cloth masks can't filter out very fine particles and will not stop you from breathing in toxic gases.

"The N95 respirator masks are really the best because they can filter out the very small particulate matter that causes a lot of the inflammation within the lungs," Allada said. "But nationwide we are trying to divert those types of masks to health organizations."

The Oregon Health Authority has more about wildfire smoke and your health.