See What HealthDay Can Do For You
Contact Us
November 17, 2009 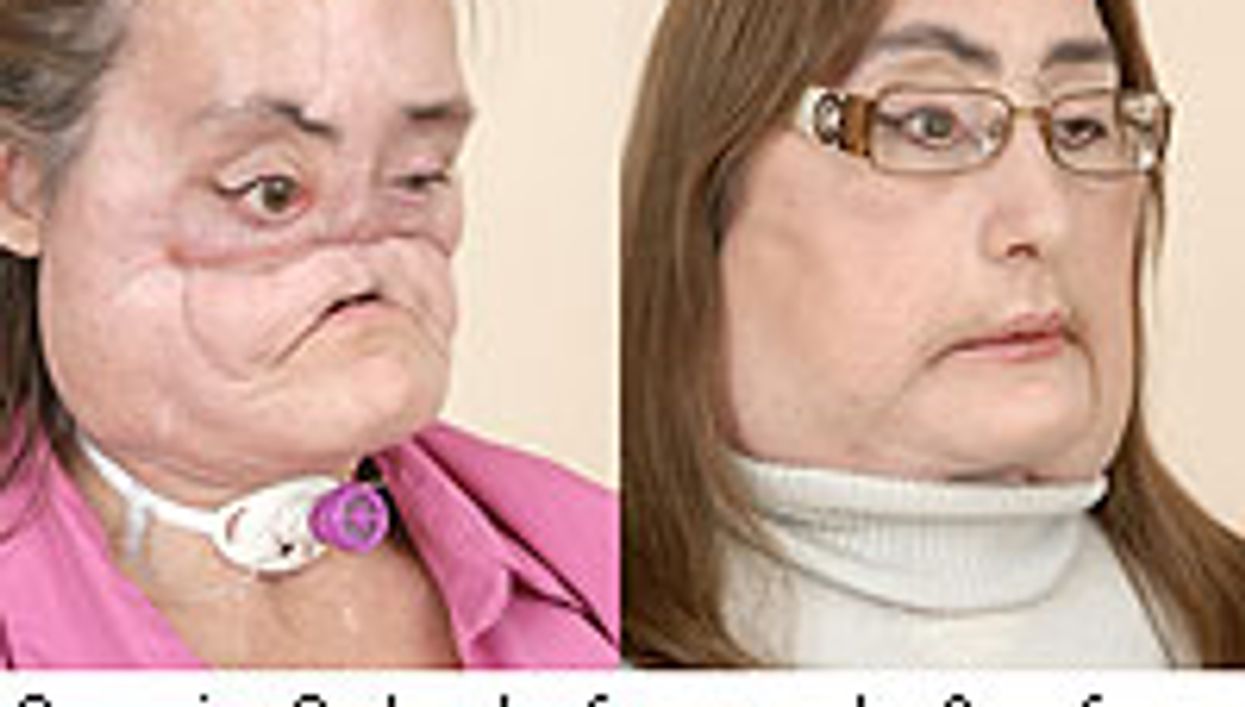 TUESDAY, Nov. 17, 2009 (HealthDay News) -- The woman who underwent the first facial transplant in the United States can now smell, taste what she eats and breathe through her nose, according to a report from her surgeons.

Nearly a year after the surgery, blood vessels from the transplanted tissue have integrated with existing tissue, she has had no significant complications and her sensory and motor abilities, including the ability to speak, continue to improve, they say in the November/December issue of the Archives of Facial Plastic Surgery.

"This really does open up new frontiers both for transplanting more of the face and for offering it to individuals with previous reconstructive failures," said Dr. Wayne Larrabee, Jr., a clinical professor of head and neck surgery at the University of Washington in Seattle and editor of the journal.

Connie Culp, a mother and grandmother from Unionport, Ohio, was shot by her husband in a failed murder-suicide attempt in 2004. The shotgun blast destroyed the middle part of her face, including her nose and nasal passage, upper jaw and cheeks, and she lost her sight.

Though there were three face transplants performed worldwide before Culp's -- and a total of about seven to date -- Culp's "near-total" face transplant was among the most extensive ever performed. The surgery replaced much of the soft tissue of her face, the bony structure of the palate (roof of the mouth) and her upper jaw.

"This patient had undergone multiple previous procedures for reconstruction which had failed," Larrabee said. "This made the surgery much more difficult but the ethical decision very clear."

Last Dec. 9, eight surgeons from the Cleveland Clinic replaced 80 percent of Culp's face and jaw during a 22-hour operation. The donor was a woman who had been pronounced brain dead and was a match for Culp's age, race and skin complexion. The new face included the nose, upper lip, lower eyelids, upper jaw, incisor teeth, palate and various glands, as well as bones and ligaments. Culp, then 46, was given immunosuppressant drugs to prevent rejection.

Before operating, surgeons weren't sure if all of the donor tissue could be supplied with blood through the facial arteries, but bleeding from the tissue during the surgery told them the facial arterial system would be enough, according to the report.

"It demonstrates not only a masterpiece of surgical technique but the importance of modern medical teamwork to accomplish this patient's goals," Larrabee said. "Technically, the ability to use just the facial blood vessels and not the deeper ones opens new possibilities. Eventually this operation could become standard for severe facial injuries."

Dr. Laurie Casas, a clinical associate professor of surgery at the University of Chicago Pritzker School of Medicine, said much more needs to be learned before facial transplants become anything more than experimental. Some of the key questions that need to be answered are the long-term impact on patients, including to what extent they are able to return to normal activities, such as work and socializing.

"We are all so excited about the fact that it can be done. The question is, 'On whom should it be done? And when should it be done'?" Casas said. "The world, including the United States, is just beginning to understand how face transplants will really fit into our reconstructive efforts."

Culp will likely have another surgery later this year to remove extra glandular tissue around her lower jaw. If surgeons get their wish, the final outcome will look remarkably like a normal face.

"If the promising initial results continue, the operation may become standard of care for extensive facial injuries," according to the report.

In related news from the same journal, researchers from the University of Texas Medical School found that rib cartilage from human donors is an alternative to the patient's own rib cartilage in nasal plastic surgery.

Though the patient's own rib cartilage is the preferred choice, it's not always suitable, researchers write. A review of medical records of 357 patients who underwent nasal plastic surgery using irradiated donor cartilage found a complication rate of 3.25 percent, no greater than the complication rate when the patient's own cartilage was used. Irradiation decreases the chances of rejection, according to the study.

During an average follow-up of nearly eight years, about 94 percent of patients reported being satisfied with their appearance, ability to breathe and quality of life.

The United Network for Organ Sharing has more on transplants.