See What HealthDay Can Do For You
Contact Us
October 8, 2007 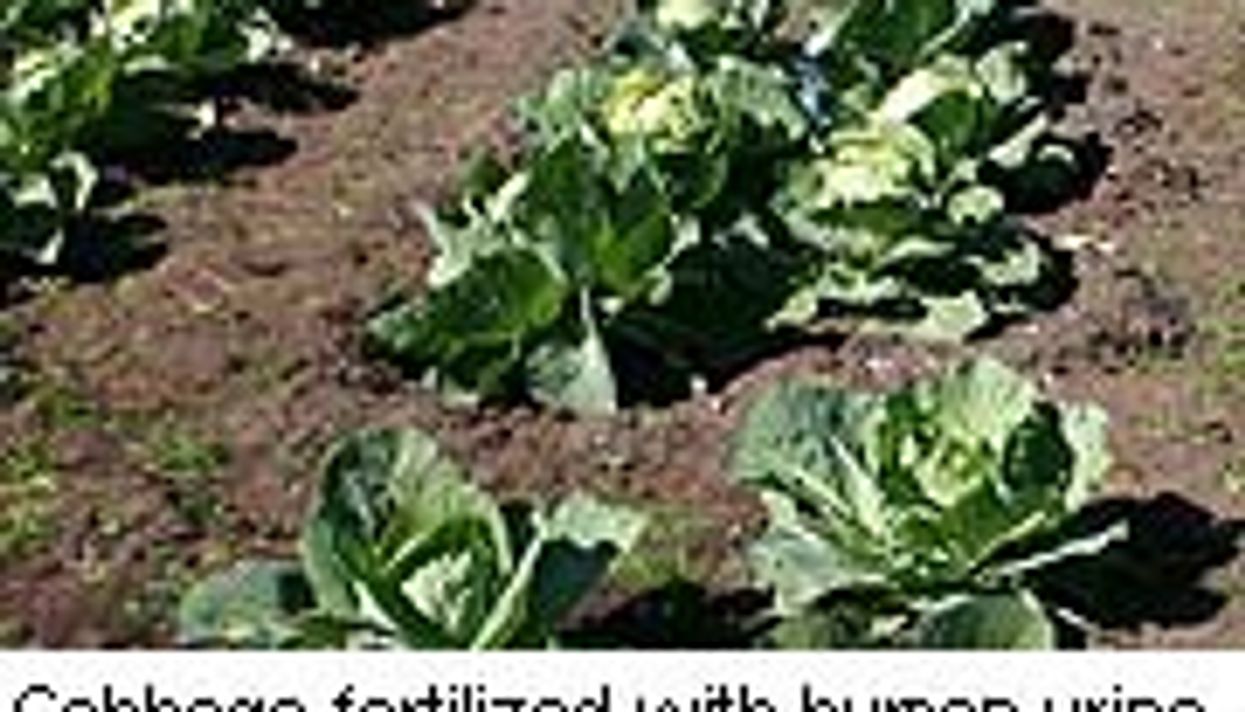 MONDAY, Oct. 8, 2007 (HealthDay News) -- Cash-strapped farmers shouldn't look far for a source of free fertilizer, according to a new study that finds human urine to be a great source of nitrogen and other minerals.

The "yuck" factor aside, scientists who used urine to help raise a bumper crop of cabbages said the practice may not be a bad idea.

"Urine is a valuable fertilizer which poor people could use to increase yields and not contaminate their environment. It is a resource, not a pollutant, if correctly managed," said Helvi Heinonen-Tanski, leader of a research group at the University of Kuopio's Department of Environmental Sciences in Finland.

They decided to look into how human urine could be used to help farmers and at the same time save water and reduce the contamination of water resources, added Surendra K. Pradhan, a research student at the university and the study's lead author.

"It is important to areas which are not connected with wastewater treatment systems," he added.

The use of urine as fertilizer is uncommon, but it is increasing in some parts of Finland, the researchers said. It also has been used to fertilize barley and cucumbers, the study said. "We assume the nitrogen contents of human urine could be a good fertilizer for many other plants or crops," Pradhan said.

The researchers chose cabbage as a test crop, because it needs a lot of nitrogen, it is distributed worldwide, and it can be preserved as sauerkraut.

The cabbage fertilized with urine was compared with similar plots of cabbage that either went unfertilized or where commercial fertilizer was used. At harvest, the cabbage enriched with the urine had several advantages: It was slightly larger, it grew to its maximum size more quickly, and, for most of the growth cycle, it suffered less bug damage than the commercially fertilized variety.

Cabbage from all three plots was made into sauerkraut and taste-tested by 20 panelists. Each type tasted different, but all were rated "good," the study said.

As a result of the findings, the team concluded that urine produced by one person over a year would be enough to grow 160 cabbages -- that's 64 kilograms (141 pounds) more cabbage than could be grown in a similar plot fertilized with commercial fertilizer. They recommend collecting urine from eco-type toilets, storing it, then scattering it on the soil around the plants rather than directly on them.

The study was expected to be published in the Oct. 31 issue of the Journal of Agricultural and Food Chemistry.

Urine is "a good natural nitrogen containing substance and probably could be easily utilized" as a fertilizer, agreed Dr. Philip Tierno, director of clinical microbiology and immunology at New York University Medical Center, New York City. "There's nothing wrong with using it," Tierno said. He added that there is little risk of contamination by urine-borne pathogens, because they would be in competition with microorganisms found in the soil and would "probably lose the battle."

Urine is actually a relatively clean substance, added Tierno, author of the book The Secret Life of Germs.

Barry Swanson, a food scientist at Washington State University, had a similar reaction. The study "demonstrates pretty clearly that although this might be somewhat objectionable in our hygienic population, it probably has pretty practical application in other countries," he said.

"It makes a lot of sense. Human urine does contain nitrogen. No matter what you apply to the soil, plants take up organic or inorganic material in the soil irrespective of where it comes from," Swanson added. He said urine is a good source of nitrogen, potassium and phosphorous.

Preserving the cabbage by making sauerkraut also has some advantages, he said. The large amount of salt used in making sauerkraut inhibits the growth of pathogens. So, if any pathogens were unexpectedly present, the salt would eliminate them.

Find out about the urinary system at the U.S. Nationnal Cancer Institute.